The New York Week That Was (The Decision Edition)

Share All sharing options for: The New York Week That Was (The Decision Edition)

We've had a week or so now to get used to a LeBron-less world. For two years all we heard was LeBron's coming, LeBron might come, there's cap room for LeBron, make way for LeBron, here comes LeBron. But . . . LeBron didn't come. So now what do we do? Well, the air is still just as muggy and unhealthy as before we learned of his decision, the people on the street are just as rude and uncaring and stabbings around the city remain at a record-setting pace, so I guess we just have to get on with our lives, the same as before. And while we're at it we can wait for more editions of The Decision, ESPN's special event that went over about as well as last year's TV special, A Mel Gibson Family Christmas, when the actor crooned Yuletide carols such as "You Need a Bat to the Side of Your Head" and "I Can Bury You in a Rose Garden, If You Know What I Mean."

As for future The Decisions, if we're lucky there will be an Oliver Perez episode; he'll let us in on the secret if he'll a) ever throw a strike again in our lifetime, b) refuse an assignment to come back to the major leagues, or c) change his name to Juan Pasquel in the hopes that nobody will know who he really is and start his career all over again.

The suspense will be unbearable as Glen Sather tells us if Wade Redden will a) stay with the Rangers, b) be sent down to Hartford, or c) go to the Miami Heat in a sign-and-trade.

We'll sit on pins and needles as Donnie Walsh lets the cat out of the bag on his comment that Isiah Thomas may be coming back to the Knicks. Walsh will tell us he is a) insane, b) senile, or c) what he meant to say was Isiah Thomas will never, ever come back to the Knicks in any way, shape or form in anybody's lifetime, and will not even be allowed to come within a 50-mile radius of New York City. 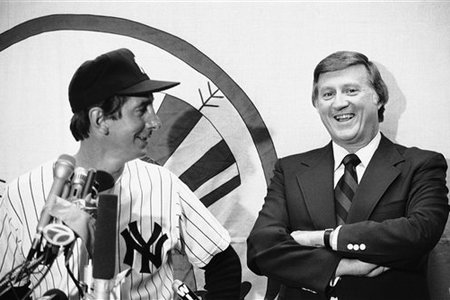 The Boss: The firings, the suspensions, the convictions, the turtlenecks, the firings, the dirt-digging gamblers, the fights, the blazers, the firings, the bullying, the pettiness, the calzones, the spending, the callousness, the firings - but above all else was the winning. Seven World Series championships and 11 pennants. George Steinbrenner was a unique, one-of-a-kind New York legend. We hated him, we loved him, we made fun of him and we revered him - all on the same day. He was a complex, many-sided individual: A character, a cartoon, a buffoon, a success, a champion all rolled into one. He was a blustery storm, a force of nature but also a generous titan, prone to giving out second chances (or fifth chances; see Martin, Billy). And now he's gone, dead at the age of 80. Born on the Fourth of July, and died on the day of baseball's All-Star Game. For good or bad, he changed baseball. And he turned the Yankees into an empire.

All-Star Game: Order has finally been restored in the All-Star Game universe. The AL went on a 12-0-1 run the last decade or so to close the gap, but the NL is still leading the series overall, now 41-38-2 with last night's victory. David Wright fared the best out the locals, going two for two with a stolen base. Robinson Cano hit a sac fly, Derek Jeter singled and walked in three at-bats, Andy Pettitte pitched a scoreless inning, Nick Swisher struck out in his one at-bat, Phil Hughes was tagged with the loss and Alex Rodriguez had the night off. Apparently he has a thumb injury, which begs the question: Why was he there in the first place if he couldn't play? And if they were trying to hide the injury, well, that plan went awry.

Cliff Lee, Texas Ranger: The Yankees were steamed and outright outraged at the Mariners for not trading them Cliff Lee last weekend. The team released an official statement: "Just who the heck do the Mariners think they are? We're the gosh-darn Yankees. We always get what we want. We have all the money in the world. We have all the resources. If we want Cliff Lee, we get Cliff Lee. We eventually get every star in baseball. We're the Yankees. Seattle can't do that to us, can they? First they screwed us out of Jay Buhner and now this. Is this even legal?" They will, of course, just sign him over the winter to a $120-million contract. And the Yanks spanked Seattle by taking three out of four from them, as they steamrolled into the All-Star break with the majors' best record.

Tomahawked: The Mets lost (or tied) their fourth series in a row, when they fell to the Braves over the weekend. After all the hatred for the Phillies the last four years or so, is it hard to muster the old loathing for the Braves? I'll answer my own question - not really. It's our last chance to give a Queens cheer to Chipper Jones, Bobby Cox and Billy Wagner. Thank God for Johan Santana and seven more shutout innings to salvage the last game. The Mets finished the first half of the season with a whimper, only going 4-6 in their last 10 games, but overall, the season so far would have to be viewed as a pleasant surprise. Ike Davis, R.A. Dickey, Angel Pagan, among others that no one was really counting on, have done wonders for the team. But they got off to a shaky start to the second half of the season last night, getting shut out by Tim Lincecum, 2-0, which puts them five games behind the Braves.

The Return of Carlos Beltran: Will he be the old Carlos, the best center fielder in baseball? Will he be a shadow of his former self? Will he be rusty for a month or so, the way Jose Reyes was? Will he not miss a beat? Will he upset the great clubhouse chemistry the Mets seem to have and rave about this year? Will he ever get rid of that giant mole? We'll just have to stay tuned. (He went one for four in his season debut last night.)

Plan B: The Knicks' big splash was the Amar'e Stoudemire acquisition, but they also signed former Charlotte point guard Raymond Felton and Russian center Timofey Mozgov this week, to go along with Anthony Randolph, Kelenna Azubuike and Ronny Turiaf. It will be almost a whole new team for the Knickerbockers, which is, of course, a good thing. The Nets were shut out in the superstar free-agent sweepstakes - I guess giant billboards can only do so much. They signed point guard Jordan Farmar, center Johan Petro and guard Anthony Morrow this week. They may not be much of an improvement over last year's squad, but they'll be young. As their roster stands now, the average age of the team is 12. And they hired Billy King as their new president to babysit all the kids.

Superstar: French star Thierry Henry was introduced by the Red Bulls yesterday. He's younger than all the other soccer greats who came to the U.S., and he isn't coming over here for Page Six celebrity reasons like that English guy, so hopefully he'll help the Red Bulls win and solidify the soccer fan base around these parts.

Bob Sheppard: R.I.P. It's been a tough week for the Yankees.

(For in-depth analysis and discussion of the Yankees, Mets, Knicks, Nets and Red Bulls, go to SB Nation's Pinstripe Alley, Amazin' Avenue, Posting and Toasting, NetsDaily and Once a Metro, respectively.)