Mike Pelfrey And Phil Hughes: Aces In The Making

After rocky starts to their respective careers, Mike Pelfrey and Phil Hughes coming into their own for Mets and Yankees.

Share All sharing options for: Mike Pelfrey And Phil Hughes: Aces In The Making

The Mets' and Yankees' landscape of first round draft picks is riddled with pitchers who never made it -- anyone seen Kirk Presley, Geoff Goetz or Ryan Bradley lately? So as Oscar Madison once said, "There's no such thing as a sure thing." (He also said, "That's why they call it gambling," while Felix Unger once stated, "Never assume, because when you assume you make an ASS out of U and ME" -- these quotes also nicely fit in with this theme).

But with every start Phil Hughes and Mike Pelfrey make this season, it's looking more and more like the Yankees and Mets have hit the jackpot. While CC Sabathia and Johan Santana aren't exactly chopped liver (and if it weren't for one bad inning against the Phillies and a whole lot of bad luck and lack of run support, Santana would be an early Cy Young candidate), the two young starters are playing the role of aces right now.

The difference between the 2009 Pelfrey and this year's model is dramatic. Last season, Pelfrey paced around the mound like an insane asylum patient, constantly licked his hand, committed balks galore, sweated profusely with a nervous twitch every time a runner reached base and even fell down a few times, all while working at a molasses-type pace. And it showed in his record: 10-12, 5.03 ERA, 1.51 WHIP.

The 26-year-old Pelfrey took four, mostly struggle-filled seasons to reach this level. He started 17 games for the Mets in 2006 (2-1, 5.48) and 2007 (3-8, 5.57), and joined the rotation full-time in 2008. That season he had a three-month stretch where it looked like he was coming into his own. His overall stats for the year were promising (13-11, 3.72 ERA, 1.36 WHIP), but he wasn't consistent. And then the next season -- maybe he was a victim of the Verducci Effect? -- everything fell apart for him. And his performance in spring training this year didn't inspire any amount of confidence in anybody, except himself. He maintained he was working on his secondary pitches, and that all would be well once the season got underway.

And he was absolutely correct. He's mixed in an impressive splitter and has broken out his old curve ball to go with his two- and four-seam fastballs and sinker. And voila -- he's ace-like material. He's a guaranteed win after a Met loss and may possibly turn out to be the franchise's first homegrown pitching star since Dwight Gooden. 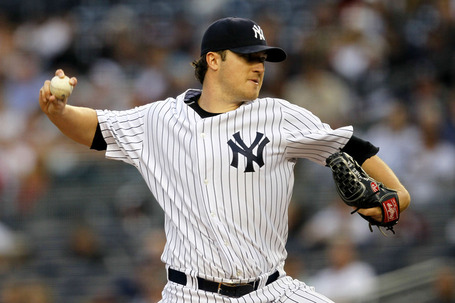 Like Pelfrey, Hughes has had a somewhat rocky road on the way to his success as a starting pitcher this year. After being added to the rotation April 28 last season, he made seven starts to the tune of a 2-2 record and 5.45 ERA. He was then moved to the bullpen to make room for Chien Ming-Wang's return from the DL, but he flourished in his new role. He was the 2009 version of the 2007 version of Joba Chamberlain. But even with his success as a reliever, the Yanks clearly wanted him to win the role of the fifth starter coming out of spring training this year. He did, and he hasn't disappointed. His 2010 stats prove that he's been one of the best pitchers in the AL this year: 7-1, 2.54 ERA, 1.05 WHIP, .203 BAA, 16:5 K:BB ratio (64 to 20), 63 2/3 IP.

Hughes was taken in the first round of the 2004 draft, with the pick the Yankees received when Andy Pettitte went to Houston. (Is there anything Pettitte can't do? He's always thinking of the Yankees.) The not-quite-24-year-old started 21 games in 2007 (5-3, 4.46) and 2008 (0-4, 6.62 ERA), but mainly battled injuries, pulling his hamstring while throwing a no-hitter (he tripped over Jim Joyce while covering first -- just kidding), strained an oblique and cracked a rib. He then settled in the bullpen in '09, and instead of stunting his growth, his time spent there may have helped him to be more aggressive and attack hitters. His fastball easily reaches the mid-to-high 90s, which coupled with his knuckle curve and other breaking pitches, is a deadly combination. He was tabbed the team's fifth starter to begin the year, but now he's the Yankees' best starter. And one of the best pitchers in the league.

They weren't instant success stories, but Pelfrey and Hughes have made the appropriate adjustments in their careers, matured and have become pitchers instead of throwers. And now when they go seven or eight innings and only let in one measly run, it's just another ho-hum outing for the duo. But it's a damn good ho-hum outing. And the Mets and Yankees couldn't be more thrilled.

-- For in-depth Mets coverage, check out SB Nation's Amazin' Avenue, and go to Pinstripe Alley for everything Yankees.