Why Begging For The Nets Makes Sense For LeBron

Share All sharing options for: Why Begging For The Nets Makes Sense For LeBron

LeBron James should sign with the New Jersey Nets. (Yeah, that sentence hurt about as much as the concept of Zach Randolph. Maybe even Steve Francis.)

Not to mention their owner is a crazy multi-billionaire Russian dude who owns the world, including the newly-launched SBNation New York hub, where the contributors love Mikhail Prokhorov and hate having tiny bits of radioactive poison slipped into our food for months by shadowy former KGB agents.

Let's look at all those factors one-by-one.

For some reason, people assume being in a major market automatically translates to marketability. I'd argue this isn't true: LeBron seems way more marketable in the Rust Belt than any Knicks player of the past 20 years, including clear 50 Greatest player Patrick Ewing. I'd say New York players that do get put in enough ads to subliminally appear in my dreams -- like Derek Jeter, who frequently just drives through my REM cycles in a Ford Edge, chugging Gatorade with a Jordan batting glove on and a Movado watch for no apparent reason -- probably have their postseason play to thank roughly as much as their locale.

But, if you're looking for a big market, well, the Nets got you. LeBron goes to Chicago, he'll be in Jordan's shadow. He goes to the Clippers, well, he'll be going to the Clippers, which is about as close to legacy suicide as you can get. (Where you at, multiple All-Star Michael Olowokandi!) Yes, he'd have to play in New Jersey for a year or two -- and, sorry, state of New Jersey, nobody wants that, despite how great of a television show Jersey Shore was -- but eventually he'd come to Brooklyn, the b-ball borough, the birthplace of the two biggest figures in basketball history, in my skewed opinion. (Sadly, neither is Stephon Marbury.) 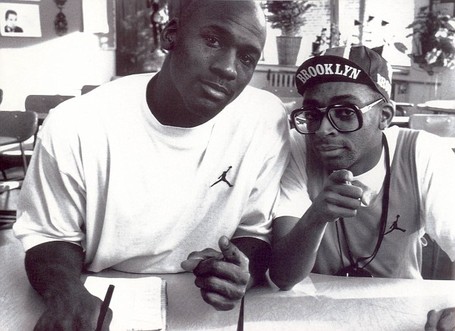 A lot of teams are making it evident that part of their marketing strategy towards LeBron includes having a wildly unstable front office, so that everybody's favorite all-world bro can essentially craft his new team to his desires. Cleveland and the Clip Show both had their GM/coach one-two punches fall very respectably on their own swords in the waning parts of this past season, and it wasn't very subtle.

Kiki Vandeweghe will be let go when his contract expires, meaning New Jersey will be without its fearless leader of almost an entire season, and interim head coach and general manager. The Nets' front office matches LeBron's desired level of flexibility.

Well, $26 million in cap space. That'll buy you a LeBron and a bag of chips, if that bag of chips is worth $12 million a year, like current Knick David Lee. I'm not sayin', I'm just sayin'.

It's not the most any team has heading into the 2010 Summerpocalypse, but it's close.

You're looking at a roster that won 12 games last year. Not too impressive.

But first off, none of the teams LBJ's heading towards are going to be hoisting the 2011 chip. The Knicks (nah, unless they get Wade too) Bulls (close, but not quite) Clippers (I love Baron, but no) and yes, the Cavs (see: 2010 playoffs) can't win an NBA championship with the current roster they have, plus James.

Neither can the Nets.

But they've got two people I'd love to see play besides LeBron: Devin Harris, an All-Star-caliber point with a  bigger mind for penetrating and dishing than Mo Williams ever had, something that could cause true havoc teamed up with LeBron; and Brook Lopez, who notched 18 and 8 this season for a team that needed him to be a primary scorer -- his numbers would go down with James, but he's still a force to be reckoned with in only his second season.

Neither of these guys are world-beaters, and at 27, Harris isn't young anymore. But both are still developing, and would look fearsome alongside LeBron. They'd go deep in the 2011 playoffs,  and with another piece could be a finals contender in 2012, if the world hasn't ended yet.

Mikhail Prokhorov is awesome. Whereas everybody from Knicks fans and media to players past and present despises James Dolan, Prokhorov is a beacon of cold, steely Russian sunshine into the concept of ownership. He's going to treat his new team like a business and understands that in sports, business entails being successful, and popular in the community, and he'll market James globally more than anybody else besides Nike possibly could. He blows any other teams owner out of the water, if possible, literally, with a tactically-armed cold war-era nuclear submarine.

So that's why LeBron should become a Net. If you don't mind, I'm going to go repent by watching Starbury-era game tape.