The top stories of the week in the world of New York sports.

It's almost D(ecision) Day for LeBron James. Where will he go? The Cavs? The Knicks? The Nets? The Bulls? The Clippers? The Heat? The Globetrotters? The suspense is killing us. But really, he should forget about all those landing places -- the only logical choice for the King is to go to college. He had a pressure-filled high school experience, where he was already famous as a teenager, and then he went right to work. There was no trip to Europe before entering the workforce. No time off. No fun.

He missed out on the whole college experience, goofing around with some buddies, drinking too much, sleeping late, no bosses, nothing but good times. Think of the antics and high jinks he could get into with an Old School-like adventure that lasts for four years. No doubt someone would throw him a LeBron-a-palooza right off the bat. Picture the joy-filled smile on his face as he partakes in a beer bong and shouts to his liquored-up cohorts, "When it hits your lips, it tastes so good!" There aren't any pranks or good-natured fun like that in the NBA, unless you count Gilbert Arenas pointing a gun at you or Kermit Washington rearranging your face. Sure, LeBron wouldn't be able to play competitive basketball (the NCAA isn't the NHL after all, changing the rules willy-nilly for one person, a la Sean Avery). But there certainly would be a few intramural hoops teams that would vie for his services. So he could stay fit and get his exercise in.

If James enrolled in a university (uh-oh, more "Where will LeBron go?" torture), he would surely make his mother proud. What mother doesn't want her son to earn his degree? And what if this whole basketball thing doesn't work out? What then? He may only be 25, but what if he's an old 25? Sure, he's already made a billion or two, but how many players have gone bankrupt or blew their money on baseball cards, candy, mansions, Hummers and machine guns? A good education lasts forever, and he'd have a fallback career at the ready (accountant? insurance agent? something solid that would always be there for him). And if he graduated in four years, he'd still only be 29, and could reenter the NBA and resume his career if he chose to do so. So it would really be a win-win situation. His entourage needs to sit him down A Clockwork Orange-style, and force him to watch Animal House, Revenge of the Nerds and Back to School to see what he'd be missing. A few years of tomfoolery and shenanigans all while hitting the books is the best course of action for LeBron James. (For a few other reality-based ideas on what James should do, check out these stories from the SB Nation New York staff: Howard Megdal, Rodger Sherman and Steve Lepore.) 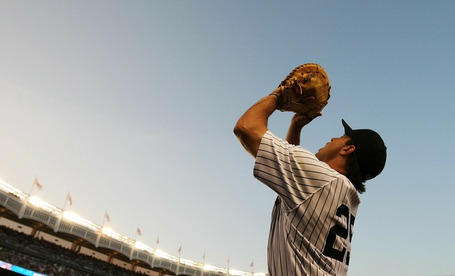 The Subway Series: The Mets looked like they were going to go on and take their first Subway Series since 2008, when they won their third out of four games against the Yankees, in a 4-0 victory on Friday night. Hisanori Takahashi etched his name into local-rivalry lore, with his second win of the season over the Yanks. I missed most of the game because I was busy singlehandedly blowing two games for my softball team (and I also missed Jerry Seinfeld in the Mets booth on Wednesday to play two more games -- damn!), but I ducked into a bar in Penn Station and downed a few beers just in time to see Angel Pagan drive in a couple of insurance runs. Knowing the game would come down to Frankie Rodriguez, I reasoned that that was the best time to head back home. For while I (kind of, sort of) have faith in K-Rod, I don't necessarily want to witness his tight-wire act. So for the train ride home, I grabbed the greatest invention known to mankind: A 24-ounce can of Bud -- and imagined all the ways K-Rod could put runners on base and then squeeze his way out of the jam. But that win was the last of the highlights for the Mets, as the Yankees took over the next two games, hitting a smattering of well-timed home runs (the jet stream to right was working for both teams on Saturday), and pitched well enough to take the series. CC Sabathia and Mark Teixeira were the stars, and those could be the games that catapult them to successful second halves. In a related story, after France was eliminated from the World Cup, the French sports minister was quoted as saying: "I told the players that they are no longer heroes for our children. It is the dreams of your partners, your friends, your supporters that you have broken. It is the image of France that you have tarnished." She went on to call them "moral disasters." I'm pretty sure she stole that tongue lashing, word for word (except for the France part), from Jerry Manuel after the Mets lost the Subway Series.

Another World Series Rematch and One That Could Have Been: Every time the Yankees play a National League team there's some old World Series rematch from one era or another to look back on. This week, the two teams from the heartbreaking 2001 Series hooked up (and we can reminisce about many old-time World Series when the Yanks play the Dodgers tonight). Arizona hammered Burnett in a 10-4 loss in the opener, but the Bombers won the next two to take the series and go 4-2 for the week. Amar'e Stoudemire watched Alex Rodriguez's and Andy Pettitte's heroics in Tuesday's game while wearing a Yankees hat that he borrowed from Hillary Clinton. But unlike Lady Gaga, the soon-to-be-former Sun wasn't drunk and he was actually wearing pants. Curtis Granderson's 10th-inning blast won the rubber match for the Yanks, while Mariano Rivera wiggled out of a bases-loaded jam to end the game -- Luis Gonzalez and his broken-bat blooper were nowhere in sight. As for the Mets, the Tigers should have been their opponent in the 2006 Series, but it never materialized, and the Amazin's have been trying to recover from the fateful moment when they lost to St. Louis ever since. Sure, the Mets can take care of the Cleveland Indians and Baltimore Orioles of the world, but what about the cream of the AL crop? Well, no problem in that department either. They crushed Tigers, 14-6, on Tuesday, with their one-through-four hitters (Jose Reyes, Angel Pagan, David Wright, Ike Davis) going a combined 13 for 21, with 10 runs scored and 10 RBI. The incredible R.A. Dickey singleknuckledly won the second game of the series. And they were one overanxious David Wright at-bat from sweeping the series (though he did drive in a run, start an acrobatic double play to get out of a jam and made an agile slide to score a run, so it wasn't exactly all his fault). Finally, the Yankees can have all the Yogi Berras and Whitey Fords they want to throw out ceremonial first pitches -- the Mets have Kevin James (who threw out the first pitch before Tuesday's game). 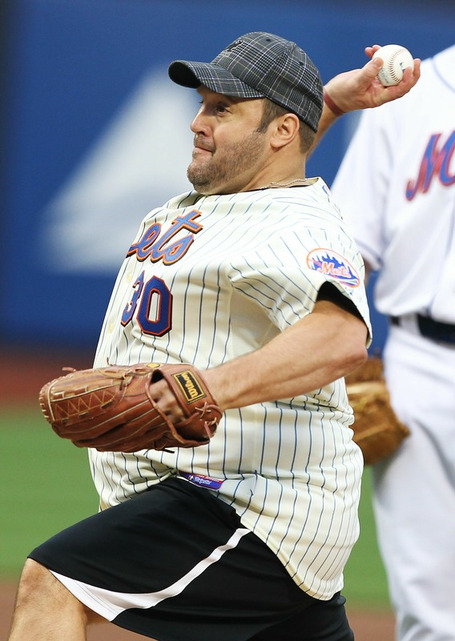 Favors It Is: The Nets have a center in Brook Lopez and a point guard in Devon Harris, now they just need . . . everyone else. It was looking like a choice between Derrick Favors and DeMarcus Cousins, and then Wesley Johnson came around the bend out of nowhere, and there were even some trade rumors involving Harris. But in the end the Nets went with power forward Favors out of Georgia Tech. He didn't come with the red flags that Cousins did, and he possesses those two great attributes that everyone loves: athleticism and upside. The Nets are hoping he'll be the perfect complement to Lopez well into their Brooklyn years. They also made a trade with Atlanta for Damion James. As for the Knicks, they stood pat with their two picks and selected guard Andy Rautins and forward Landry Fields.

Do the Right Thing: Finally! The Mets do the correct, intelligent, smart thing (which every Met fan knew should have happened to start the year) by sending Jenrry Mejia down to the minors to be a starting pitcher (and called up Bobby Parnell to replace him). Are they doing it to increase his trade value? Because they think they might need him later in the season? Or just for his own long-term development? Whatever the reason, it's the right thing to do, as he wasn't anything special coming out of the bullpen, and it was retarding his growth. As for poor John Maine? Things just get wackier for the guy. He moaned and whined about going on the DL in the first place, and now he has to be shut down because of tendinitis in his shoulder. This could be the end of his Met career, as they're contemplating driving him out to the woods and just setting him free, like they did with Oliver Perez.

Hello/Goodbye: The Devils reacquired 2000 Stanley Cup hero Jason Arnott this week. He was a member of the vaunted A Line, and scored the Cup-winning goal in double overtime to beat Dallas in the 2000 Stanley Cup Finals. Doesn't it seem like every Devil comes back for a second tour of duty with the team? Well, everyone except for Scott Niedermayer, who retired this week. He won three Cups with New Jersey (and one with Anaheim), and his next stops will be the Hockey Hall of Fame and to Newark, to have his number 27 retired by the Devils.

Uh-Oh: We never thought we'd lump these two guys together except in a conversation about MVPs, Cy Youngs and Halls-of-Fame, but Lawrence Taylor was indicted by a grand jury on charges of third-degree rape and patronizing a prostitute this week, and it's come to light that Johan Santana was accused of sexual battery back in the fall of 2009, though charges were never filed against him. Where have you gone, Joe DiMaggio?