Cervelli And Blanco Usher In The Golden Age Of Backup Catchers

Share All sharing options for: Cervelli And Blanco Usher In The Golden Age Of Backup Catchers

Let's go back decade by decade and take a quick, informative look at where the Yankees and Mets stood with the backup catchers on their rosters. Ten years ago, the Mets had playoff hero Todd Pratt, while the Yankees used Chris Turner to back up Jorge Posada. In 1990, the local teams saw the likes of Orlando Mercado, Barry Lyons, Rick Cerone and Matt Nokes grace their rosters. Alex Trevino and Ron Hodges stepped in for the often injured John Stearns for the Mets in 1980, while Johnny Oates was the main backup for the Yankees (to Cerone). And in 1970, legendary (to old Mets fans anyway) Duffy Dyer was Jerry Grote's caddy, and Jake Gibbs did the same for Rookie of the Year Thurman Munson. This season, the Bombers and Amazin's have struck gold with Francisco Cervelli and Henry Blanco.

Cervelli and Blanco are both from Venezuela (though Cervelli -- wasn't that one of Chico Marx's alter egos? -- is also Italian). Both are defensive specialists. Both are overachieving. And if today's kids are anything like I was, both catchers are being imitated all over the tri-state area, what with Cervelli's crouch, lack of batting gloves, fist-pumping and oversized helmet and Blanco's tattoos and ruthless, icy stare. Of course, I've always been easily influenced by all things sports, even as an adult. Back in the late 1980s, I tried swinging a bat underwater, a la Gregg Jefferies, but I made the mistake of doing it in the town pool and broke an old lady's arm. I was banned from the pool and run out of town. And I was once pulled over for speeding, and when the officer asked, "Did you know you were going well over the speed limit?" I mimicked Mark McGwire and answered, "I'm not here to talk about the past." When that didn't go over so well, I pulled out the Sammy Sosa card: "No hablo ingles." But I digress . . .

Blanco's been around since the 1950s, backing up Roy Campanella with the Brooklyn Dodgers. Actually, he's only been playing since 1997, but he has appeared on just about every team's roster (Dodgers, Rockies, Brewers, Braves, Twins, Cubs, Padres and now Mets). It just seems like he's been around for decades. There's a running gag in the Mets clubhouse that Blanco has killed a man. He's that menacing looking (unfortunately, his brother was kidnapped and murdered back in 2008 in Venezuela). Known affectionately as Hank White, the rock-solid catcher is not only doing his usual great job behind the plate, which was almost a given, but he's produced offensively in almost every game he's started, which includes his memorable walk-off homer back in May, against the Giants. He's throwing out potential base stealers (seven out of 11, for a 64% rate), impeccably handling the pitching staff and is even having his best year at the plate, with a career-high OPS of .795, two home runs and seven RBIs in 61 at-bats. Together with the surprising Rod Barajas the Mets have one of the best catching tandems they've had in years (sorry Brian Schneider and Omir Santos). 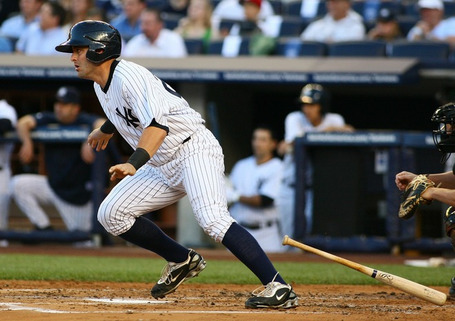 Cervelli, who should be affectionately known as Frankie Brains (cervello is Italian for brain/brains, but I don't believe anybody has actually called him that yet), has been a godsend for the Yankees. He's gotten the bulk of the playing time behind the plate, because, as Lou Brown once said, "Over 162 games, even tough guys get strains, sore arms and muscle pulls." So with tough guy Jorge Posada in and out of the lineup, the backup has essentially become the starter. Cervelli was a shortstop/second baseman back in his home country, but when he signed with the Yankees as an international free agent, it was under the condition that it had to be as a catcher (and he was told he had to be overly enthusiastic, too, or he would be shipped back to his home country). He impressed Yankee coaches and pitchers in his brief time with the team in 2008 and '09, so his game-calling, handling of the pitching staff and overall defensive prowess didn't come out of nowhere (though his lack of throwing out would-be base stealers is a weakness). What did come out of nowhere, though, has been his success at the plate. Even though he's cooled off recently (did we really think he would bat .375 all year?), he's still batting at a .290 clip, with a .373 OBP and 29 RBI, and he's an absolute machine when it comes to driving in runners in scoring position (.415/471/.512). And he gets even better when there are two outs and RISP -- .550/.571/.600. He doesn't really have any power, but as long as he's knocking in runs, so what?

The Yankees and Mets don't lose any defense when their backups are in the lineup, and in fact, the Yanks improve dramatically when Cervelli is catching instead of Posada. And offensively, the teams don't suffer either (especially when Posada can DH). Cervelli may not be the Yankees' catcher of the future, but he's the perfect complement to whoever will be the starter, and Blanco has been the quintessential backup his whole career. And they're both having better seasons than either of their teams could have hoped for.