A look at the top stories of the week in the world of New York sports.

Here we go again. It's Mets vs. Yankees time once more. The Amazin's are leading the series this year, as they took two out of three last month in Citi Field. The all-time record for the two teams stands like this: Yankees 10 wins, Mets eight wins, one tie in the Mayor's Trophy Game; Yankees 43 wins, Mets 32 wins in interleague play since 1997; and Yankees four wins, Mets one win in World Series play. So the final tally (not including spring training games) is Yanks 57 wins (and, of course, one World Series championship), Mets 41 wins, one tie. The first-ever Mayor's Trophy game between the two teams was played at Yankee Stadium on June 20, 1963. Casey Stengel gained some revenge against his former team when the Mets defeated the Yankees by a score of 6-2. The initial interleague game in '97 starred Met pitcher Dave Mlicki, when he received his 15 minutes of fame by throwing a complete-game shutout against the Bombers.

Here are some other firsts in the history of this local rivalry:

Oct. 22, 2000: The first 'roided-up, enraged pitcher to throw a bat at the opposition. Roger Clemens claims he thought Mike Piazza's broken bat was the ball. So let's get this straight, if Piazza hits a grounder back to the mound, he would have thrown the ball at the base-runner instead of his first-baseman like it was a game of kickball? OK, Roger, no wonder you're in so much trouble these days.

June 15, 2002: The first pitcher to throw at another pitcher, miss him, but then hit a home run against him later in the game. Shawn Estes tried to exact revenge for the Mets against Clemens, but Estes comically screwed everything up by completely missing Clemens when he threw at him. Geez, the guy's a big enough target. Estes did homer off Clemens, as did Piazza, and the Mets won, 8-0.

2005: The first time a New York manager asks his rival counterpart if he's going to finish his sandwich. Joe Torre memorably queried Randolph about his sub in a commercial for Subway. It was a historic event in New York City baseball history.

June 12, 2009: The first second baseman to inexplicably drop a pop-up, which would have sealed an exciting come-from-behind victory, leading to millions of Mets fans wanting to wring his neck. Nobody cared if Luis Castillo was going to finish his sandwich that night. After retrieving the ball near his feet, Castillo hurriedly looked around for Mike Piazza so he could throw the ball at him, but the retired catcher was, unfortunately, in another state at the time.

June 14, 2009: The first reliever to confront another reliever and challenge him to fight. Frankie Rodriguez sought out reliever Brian Bruney during batting practice after the Yankee had made a few disparaging remarks about K-Rod. Bruney threw his sandwich at the Met and then ran away as fast as he could.

Those are only five "firsts." We could go on forever. But meanwhile, here are the top stories of the week in the world of New York sports.

World Series Rematches: In a 1969 World Series rematch, the Mets didn't need Donn Clendenon, Al Weiss, Jerry Koosman, Ron Swoboda or Tommie Agee to beat Baltimore this time. The Amazin's swept them with ease, as they should have. Or did the O's just beat themselves? Of course, these Orioles don't have Mike Cuellar, Dave McNally, Brooks Robinson or Frank Robinson. The modern Birds enabled the Mets to win back-to-back road games for the first time since last July. The next World Series rematch (2009 and 1950) took place in the Bronx when the Yankees faced the evil Phillies. Philadelphia got a bit of revenge for those two World Series losses by taking two out of three in the Bronx. The Yankees' bats have fallen asleep, a couple of starting pitchers failed to cover first base and Alex Rodriguez was seen happy-assing his way around the bases on Wednesday night, as everyone was searching for clues about his hip/groin issues.

Houston vs. New York: The Yankees' other series this week was against Houston, which was a rematch of . . . umm, I'm thinking . . . the 1994 NBA Finals. That's the best I could do. The Bombers took care of the Astros with ease, by sweeping them back to Houston. John Starks went two for 18 in the series, though. Of course this version of the 'Stros doesn't have J.R. Richard, Cesar Cedeno, Jose Cruz, Nolan Ryan or Bob Watson to help them. Jorge Posada bashed two grand slams, helping the Yankees to lead the majors in bases-clearing swats this year, with six. 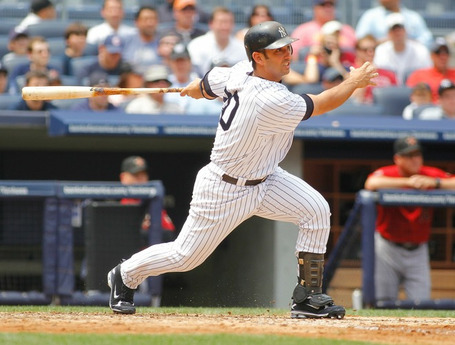 Cleveland vs. New York: The Mets' other series this week was a rematch of the 1954 World Series, when they took on Cleveland . . . oh yeah, that was the New York Giants. The old Giants did have future Met manager Wes Westrum and of course briefly-a-Met Willie Mays on that team, though. The Amazin's continued their torrid pace, by sweeping another subpar AL team for their sixth consecutive road win and seventh overall. They were led by torrid David Wright, a torrid Ike Davis, a torrid Jose Reyes and a starting pitching staff that's been unbelievable the last month. Meanwhile, John Maine, Luis Castillo and Carlos Beltran are all rehabbing - just as long as Oliver Perez stays inactive, everything will be fine. And come to think of it, Maine and Castillo can take their sweet time as well.

Not So Mini Dramas and Injuries: The Jets and Giants held three-day mini-camps this week, with each taking a spin in the New Meadowlands -- and Domenik Hixon didn't much care for the new digs, as he got his cleat caught in the spongy field, tore up his knee and is now out for the year. Is it too late for the Giants to go back to the Polo Grounds? There's much grumbling, whining and complaining over in disgruntled Jet Land, while it's nothing but tranquility and all business on the Giants side of things (except for their kick returner's season-ending injury, of course). Hard Knocks looks like it's going to be a soap opera with all of Gang Green's drama, in-fighting and unhappiness. Exhibit A is Darrelle Revis: He did show up for mini-camp but left practice early on Monday with what he termed "lightwalletedness." Now it looks like the Jets may be willing to pony up $100 million for the best corner in the league, but Revis is still not impressed.

Meet the New Bosses: The Nets introduced new coach Avery Johnson in a press conference on Tuesday. The confident Little General took a page out of Rex Ryan's book when he stated that the Nets can go from worst to first. And he confessed that after his interview the other week, he and his wife took in the Broadway show "Jersey Boys." The demanding, no-nonsense coach made the actors run laps, though, when Johnson heard an off-note in one of the songs. Over in Newark, Devil legend John MacLean was (finally!) named the team's new coach. He's been patiently waiting his turn for years, and now the classy former Devil (and Ranger) gets his chance.

USA! USA! USA! The United States soccer team tied England, 1-1, this week, which, really, is like beating the Brits 10-0. Every World Cup game seems to be 1-1 or 0-0. Come on, even the NHL doesn't have ties in the playoffs. Don't some cricket matches last for five days? They should just keep on playing until somebody scores, no matter how long it takes, even if a game lasts for days. The last player to stay awake can score the winning goal, and it will all be over. Or instead of overtime, they can settle things with a nice civilized game of bridge and a spot of tea.