Share All sharing options for: Watching the World Cup in New York, Day 3

People from other press outlets with the same story idea as me encountered: 4

Just one stop on the tour today. Was going to go to a Spanish bar to check out Spain-Switzerland - glad I didn't, as the Spanish lost and it would've been sort of depressing.

I headed out to Jackson Heights to catch the Uruguay-South Africa game in the one of the only Uruguayan communities in the city. I'm headed for a place called Chivito D'Oro. A chivito is apparently some type of meat-filled sandwich from Uruguay. (They really like meats.) They also like sangria, of which there's a pitcher at multiple tables. 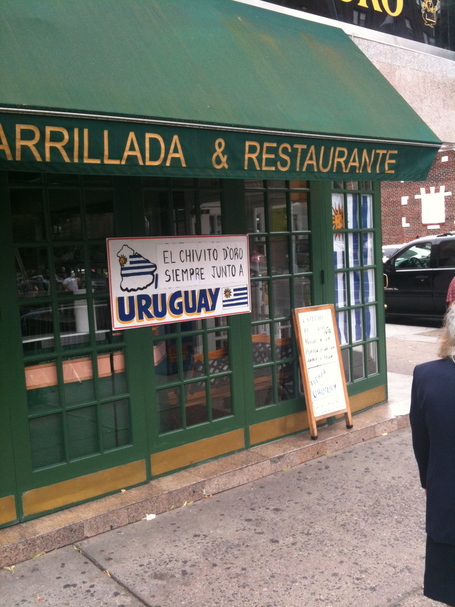 It's a nice sit-down place, with two Uruguayan flags draped on the windows. It doesn't fit my image of what I've come to expect from World Cup establishments, which are generally packed and bar-centric, but there's definitely fans here: a lot of jerseys, two face-painted flag wearers take a table in the back.

I head over for a table of older men wearing Uruguay jerseys. I pull my "hey, I sorta know Spanish" act, but we mutually decide it might be best to talk to somebody who speaks English fluently, so I'm guided over to another table. I sit down across from three generations of the Jiminez family: Hugo, the elder, born in Uruguay, William, his son, who understands what it means when I say "website", and Marcelo, William's son, who was born in Miami.

"He was born in the United States," Hugo says, "But when the World Cup starts, he is from Uruguay."

He didn't really have a choice.

The Uruguayan community in New York, it seems, is a relatively small one, essentially centered around these few blocks of Jackson Heights. William tells me this isn't the only place in the neighborhood where Uruguayans are gathered - "just walk down 37th Street", he tells me.

So at a dull-seeming moment around 20 minutes in, I take a stroll. Sure enough, two blocks of walking brings me past no less than four more Uruguayan flags: 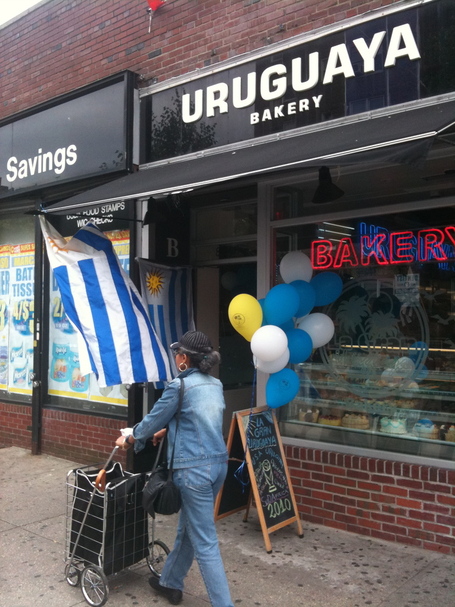 This overly festive bakery busted out two Uruguayan flags, one of which was blown by the wind and smacked me as I tried to walk into the place, balloons, and really, really detailed chalk drawings. It was one of three places on a two-block strip showing the game, and the scene in all of them was the same: a counter, and in front, about 10-15 Uruguay jerseys, eyes focused screen-ward.

On my way back from the two-block stroll, I was ready to retake my seat with the Jiminez's at Chivito D'Oro, but as I got prepared to re-pass this bakery for the second time, I noticed something different: they weren't just passively watching, they were, you know, cheering and stuff. Loudly. I went in, and saw what had happened: Diego Forlan had nailed a shot from about 30, 35 yards out, probably the nicest goal of the Cup so far. I should've known better than to get up during a game, even for five minutes - the price I pay is that I missed out on what must have been some raucous reactions. Uruguay went on to win, 3-0, but the rest of the goals were somewhat subdued.