Yankees Vs. Mets: The Tale Of The Tape

Share All sharing options for: Yankees Vs. Mets: The Tale Of The Tape

Which team has the best ace? Who's the best left fielder in town? Who has the better manager? If you want to know the answers to these questions -- you better go someplace else. Here's the real tale of the tape for round two of the upcoming Subway Series, with the most irrelevant, useless, yet scintillating comparisons we could come up with between the Mets and the Yankees. The winners aren't based on a statistical analysis but just on the whims of my aging mind.

Clown Relievers: Joba Chamberlain vs. Frankie Rodriguez. Goose Gossage labeled K-Rod a clown earlier this year because of his gyrations after a victory. But has he ever seen fellow Yankee reliever Joba pitch? Between his fist pumps and twirls, it looks like he's auditioning for Dancing With the Stars. And that's just when he's finishing his warm-up pitches. Frankie's antics consist of looking to the heavens and pointing to his grandparents after every victory. K-Rod and Joba have both had their ups and downs this year (and in their careers) while giving fans a heart attack, and they both become Fourth of July fireworks personified at times on the field. But the winner in this matchup is Rodriguez. At least he waits until the game's over to go absolutely nuts. He's all business until the last out is made -- or until Luis Castillo drops a pop-up. Whichever comes first.

Fan-Favorite Youngsters: Francisco Cervelli vs. Ike Davis. Cervelli's like the enthusiastic Little Leaguer with his giant helmet and fist pumps (when he and Joba make up the battery, it's like Rock 'em Sock 'em Robots out there). And "Bucketfoot" Davis is cool as can be, with his now signature diving-over-the-railing catches and stepping toward first base with every swing. Cervelli has done the bulk of the Yankees' catching with all the injuries to Jorge Posada, while Davis has Lou Gehrig'd his way into the lineup with Daniel Murphy's injury and Mike Jacobs' ineptitude. We love them both, and hopefully they'll be in New York for years to come. We didn't want to hurt either one's feelings so this one was going to be a tie, but when Ike hit that walk-off home run last week, he walked off with the victory in this matchup. And besides, nothing rhymes with "Francisco," while "We like Ike" just rolls off the tongue.

Faces of the Franchise: Derek Jeter vs. David Wright. Jeter's the too-cool-for-school hipster, who's already a legend and on his way to the Baseball Hall of Fame. Wright's the face of a dysfunctional franchise, though the dysfunction is no fault of his own (Mr. Met with one lonely teardrop is probably the real Face of the Franchise, though), and he started to lose a little luster the last year and a half with last year's power outage and this year's strikeouts, but all of a sudden he leads the NL in RBI and is quietly putting together an excellent season. Jeter's detractors say he's overrated, can't field and is hyped by the New York media machine, but so what -- he's dated every actress out there over the last 15 years, going through the cast of The Facts of Life to the all gals of Designing Women. Wright's probably on his way to a Hall of Fame career himself, and both play the game the right way, but Derek Jeter is Derek Jeter, which makes him better than the rest of us. And he has five World Series rings. So he's the winner.

Fun-Loving Goofballs: Nick Swisher vs. Jeff Francoeur. They can't stop smiling, they can't stop laughing -- they're the Mr. Personality of the Yankees and Mets. Nick Swisher became a legend in the pages of Moneyball. When those morons who run the Brewers selected Prince Fielder in the 2002 draft, which meant Swisher would fall to Oakland (I don't even want to go into how Scott Kazmir fits into all this), Billy Beane and his staff celebrated just like Doug Heffernan did when the King of Queens found out the McRib sandwich was coming back. Swisher's been a decent player in his career, but . . . oops. Yeah, what a bust Fielder turned out to be. Maybe Beane's not such a genius after all. Francoeur's claim to fame was as a Georgia high school football legend. Swisher can't field or hit for average (except for this year), but oh-that-OBP! Francoeur can't draw a walk but he's got a howitzer for an arm. They're both lovable and goofy, but I had Swisher's father's baseball card when I was a kid, so Swisher wins. 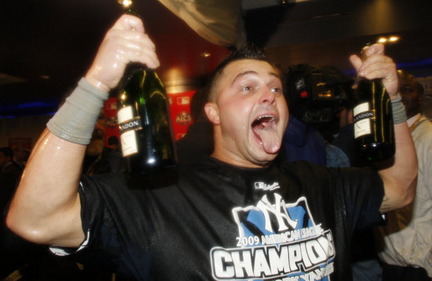 TV Networks: YES vs. SNY. Over at YES, not a bad word is said about the Yankees. It's not so much sports coverage as propaganda, at least that's their reputation. SNY, on the other hand, allows criticism of the Mets -- and everyone gets into the act, whether it's the crew from one of their "yelling-at-each-other" Loudmouths-type shows or Bobby Ojeda. Both stations show classic games from years gone by (but it's time for both to give us a little more variety in that department). YES does have the Yankeeography series, which is always entertaining, and even Center Stage is a breezy way to spend an hour (or a scary way, when Mike Tyson is the guest). SNY has the awesome Mets Yearbook series and the 10 o'clock Sports Desk every night in its favor, but their secret weapon is Gary Cohen, Ron Darling and Keith Hernandez. The YES gang can't hold a candle to that trio. Which makes the winner: SNY, please. (For a more detailed, and quite frankly better, analysis, check out this week's Behind the Mic column by SB Nation New York's Steve Lepore.)

Stadiums: It was bad enough when they renovated original Yankee Stadium, making it a shadow of its former self, but now the new one is a Disneyland replica of the two old Stadiums. Meanwhile, while Citi Field has had its growing pains, it's growing on everybody, especially now that it's been fully Metsified (and the fact that the Mets can't lose there, doesn't hurt). So while there was no reason to copy lovable old dump Shea Stadium, the Yankees really had no choice. What were they going to do? Build a stadium with a whole new design and concept? No way, Jorge. So we'll wimp out here and call this one a tie -- both teams have the home they belong in. And nobody can afford to go to either one of them anyway (well, I can't).

Celebrity Fans: Yankees diehards include the likes of Rudy Giuliani, Billy Crystal (though even he admitted the Mets dominance of the city two decades ago when he sported a Mets hat in City Slickers), Denzel Washington and Jack Nicholson. While the Mets boast Jerry Seinfeld, Kevin James, Matt Dillon and Jon Stewart among its well-known followers. Working against the Bombers? A-Rod's Hollywood girl du jour and the prominent bandwagoners who fleetingly don a Yankee cap. A bandwagon for celebrity Met fans? Hah. All Mets fans, rich or poor, are diehard. How could they not be? They may be rich and famous beyond our wildest dreams but they suffer a little, too, just like us. So celebrity Mets fans win. Plus they're funnier.

Second Generation Owners: Jeff Wilpon vs. the Steinbrenner Brothers. Their fathers did all the work, and once they passed a Billy Madison-like test, the sons took over the local baseball teams. Li'l Jeff meddles too much, has a hand in hiring all the wrong people and was even drafted by the Expos as a favor to his father (but never actually played a game in pro ball, and then the Expos had to move to Washington, D.C. -- coincidence?). Gruff, chain-smoking Hank is outspoken, entertaining and fires from the hip. So the family has made him disappear. Now Hal is the out-front son. Well-spoken, classy and intelligent, he's the winner of the "Thanks-for-the-baseball-team, Dad" challenge.

So there you have it. What does it all add up to? Pretty much nothing.