Share All sharing options for: Watching the World Cup in New York, Day 2

People from other press outlets with the same story idea as me encountered: 4

So, I'm very, very done with this whole leaving my house to watch 7:30 a.m. games elsewhere. Sorry, it's just not happening on a regular basis, and I'll tell you why.

The Bohemian Beer Garden out in Astoria is probably one of the coolest settings in the city to watch the World Cup. First off, it's a beer garden: built in 1910, it's a really relaxed setting: trees and picnic tables fill a large courtyard, surrounded by about 10 plasma screen TVs, with a large projector screen in the middle to boot.

"And for the USA-England game, it was completely full," says James, the general manager. "You couldn't move. You could hear the crowd two blocks away. One of the neighbors said she didn't need to watch the game, she just heard the crowd and knew if there was a goal."

It's run by the Bohemian Citizen's Benevolent Society of Astoria, a group of 200 members of the large Astorian community of residents of the ex-Czechoslovakia. They use the funds from the "good times" provided by the beer - a staple of Czech and Slovak culture, according to anybody you ask - to fund the rest of their projects.

And at 7:30 a.m., I assumed some of them might be there, to watch Slovakia play New Zealand.

"I bet a lot of the guys we normally have here went to work, and saying hi to their bosses,"  James said. "And then trying to sneak out while he isn't looking to watch the game."

When I showed up about 20 minutes into the first half, there were about 10 people there: me, James, the bartender, one Czech man, Jan Mihalovic, his Czech friend, two people watching in the courtyard all by themselves, and, of course, a reporter from the New York Times and his photog. 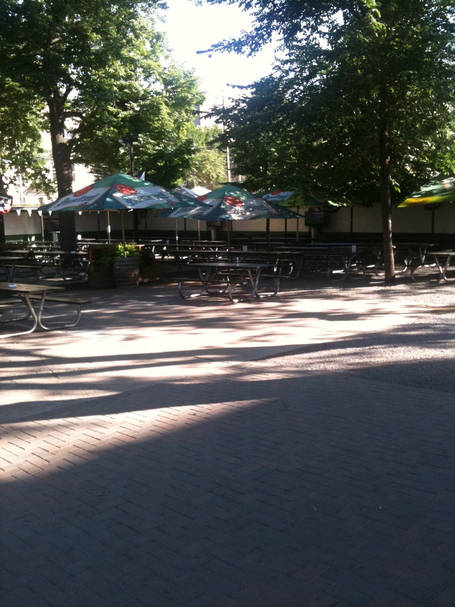 Imagine how nice this was when it was filled with people... 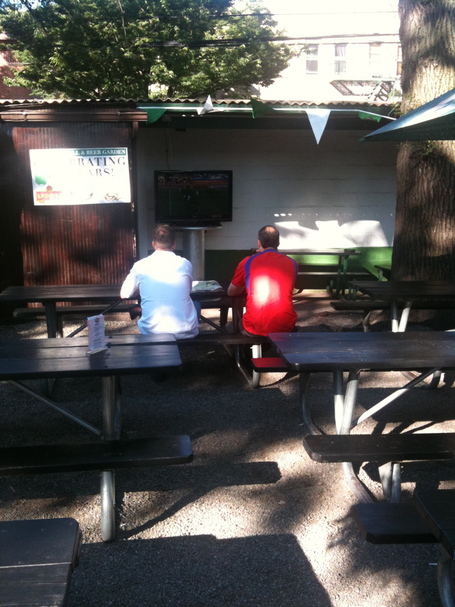 Journalists. We're annoying. There's only about 10 stories that have ever been written in the world, and me and this guy were trying to write the same one. If you go to the NYs website today, you can read this.

This sort of turned me off to the concept of hanging around and watching soccer with these people, or even staying around to see the large turnout the bar owners expected for Cote D'Ivoire-Portugal. There were six people in the bar that weren't journalists, and it wasn't going to be any fun if we were both peppering everybody there for the same questions. I wasn't going to bother. I decided to head out at halftime, after having spoken to people for about 25 minutes.

Jan, who has lived in the area for a long time - he couldn't get more precise than 20-30 years - and drinking Budweiser at the Bohemain Beer Garden ever since, told me I might have more luck finding Slovak people at another bar around 10 minutes away, but I realized this experience was a casualty of the 2010 World Cup's logistics.

"The South Africa thing is killing these mornings," James said.

So go to the Bohemian Beer Garden. It's an idyllic setting you don't see much of in the city, and it gets really crowded with other soccer fans ever day.

So, I'm not giving up easily on just missing nations involved in the World Cup.

However, there is no North Korean fanbase anywhere in the world, except maybe in North Korea. Even then, I wouldn't bank on it, if you've read the articles about how North Korea is paying Chinese fans to attend their games for them.

But I wasn't going to be sure until I checked. So at 2:30, around kickoff time of the Brazil-North Korea game, I went over to Little Korea, the two-block stretch of midtown that randomly is filled with Korean restaurants. It's about a five-minute walk from my house.

I didn't do any legit inspecting. I just walked up and down 32nd Sstreet, window-watching to see if anyplace had a significant gathering of Korean fans.

Yeah, nah. Just people eating lunch. Some restaurants weren't even airing the game on their TVs.

So, all in all, not the best pub crawl game. But I'm off to hit up some sort of Spanish place, so let's do this.