Share All sharing options for: Watching The World Cup In New York, Day 1

I find myself in Times Square at 7 a.m. This disturbs me because a) Times Square is for tourists, and I always feel really weird there and b) it's 7 a.m., which, as a college student, is a time I was only semi-aware existed. Kind of like the 1970s.

It's Day One of this goal to go to go somewhere to hang out with supporters for all 32 teams in the World Cup. And looking around Times Square, I notice that there's about as many of Times Square's normal denizens -- families of four in matching "I Love NY" T-shirts -- as there are people in bright orange soccer jerseys. It's 7 a.m., and the World Cup has descended on New York, and the Dutch population of New York has descended upon Tonic Times Square for the Netherlands' match vs. Denmark.

"It's hard to say how many Dutch people live and work in New York," said Patrick, a 25-year-old Dutch native on a six-month internship in the city, "so I was surprised to see that this many people showed up."

If you're unfamiliar with Tonic, it's pretty much the biggest sports bar ever: three floors, each filled with 10-plus projector screens. And as the bar became more and more established as the official place for any Dutchmen in New York to go during big soccer tournaments, it became more and more common for all three floors of the bar to turn into a sea of orange. 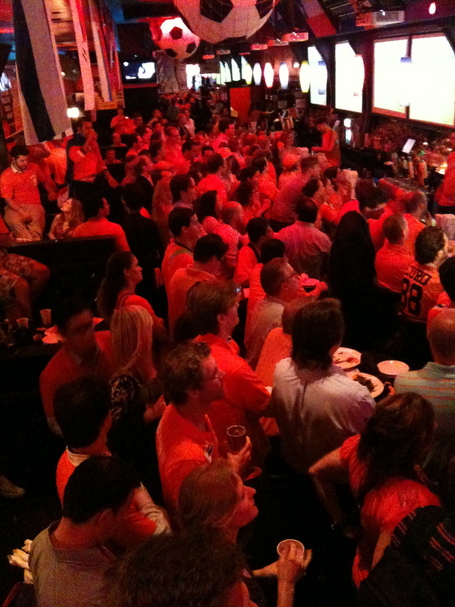 "I mean, it's a 7:30 a.m. game, and we're completely full," said Joe Jacobino, Tonic's director of sales and marketing.

It occurred to me that I'm going to have a lot of experiences where I'm the only person not wearing a certain color. I rocked a purple Northwestern hoodie, and immediately realized that every single person -- every. single. person. -- had some sort of orange on, from jersey-wearing toddlers banging orange thundersticks on the shoulders of their orange-clad parents, to your flag-bearers, to your about-to-go-to-work-after-the-game crowd wearing suits with orange ties. My personal favorite was a 20-something girl that seemed to be dressed completely normally until I noticed she was holding a garish pair of orange Kanye shades.

However, something was missing: I had picked Tonic as my place to go for this match because I had read that it was also the home of Denmark's watching contingent. But either they had blended into the Dutch throngs, or they weren't there. So as the crowd oohed and aahed as the Netherlands fiddled with the hapless Danish defense, I began to play a spirited game of "find the Dane." Luckily, during my youth, I learned how to spot dudes in red and white stripes in large crowds, so it wasn't too difficult: three disturbingly blond people in red sat at a table in the front of the bar, engulfed by the surrounding Dutchmen. 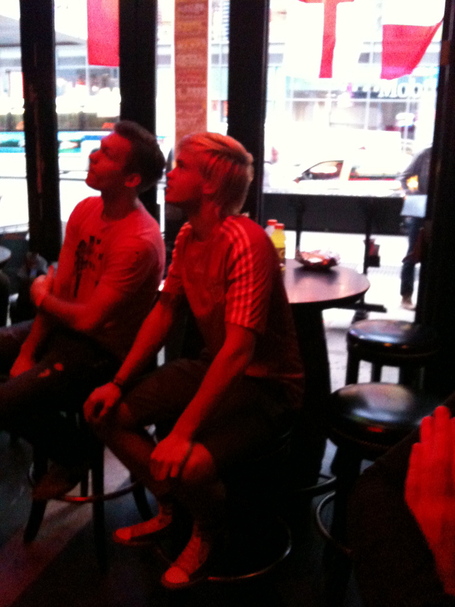 "I was hoping to see more people from my country here," said Tobias, a tourist visiting from Denmark. "I saw one guy from Denmark, but he was already walking upstairs when I saw him."