It's time once again for one of Bud Selig's harebrained schemes -- interleague play. The commissioner has a long list of madcap machinations: Canceling the World Series, ending an All-Star Game in a tie, having the All-Star Game winner determine home-field advantage in the World Series, starting games in the middle of the night, playing the World Series in November, stealing a team from Seattle and putting it in Milwaukee, letting mediocre teams into the playoffs, having everyone call him "Bud" instead of his given name (Allan), and letting the owners do whatever they want by charging whatever prices they want, coming up with any crazy ticket package gouges they want and screwing over their fans every way possible.

Some fans like the whole idea of interleague get-togethers, but now teams that are competing against each other for a division title or wild card are left with unbalanced schedules and there's the whole DH fiasco that's never been settled. Selig sold the idea as a "gift to the fans." In reality it's a gift to the big-market owners. Mets-Yankees and White Sox-Cubs can make for some playoff-type atmospheres and big crowds, but Mets-Orioles/Yankees-Astros is the other side of the coin. Wouldn't Mets fans rather see the Dodgers, Giants and old-rival Cardinals and Cubs more often? And Yankees fans, the A's, Angels, Tigers and Twins?

Did interleague play make anything better? No, just different. Baseball is filled with tradition, and some things should have just been left alone. Does everything have to change? Is compulsive weight training, coupled with protein shakes, vitamins and a healthy diet, better than the classic Babe Ruth workout regimen of throwing around the medicine ball, smoking cigars, drinking 19 or 20 beers every day and consorting with flappers every night? OK, maybe that wouldn't be as effective for the modern athlete. And do we need things like theme songs for closers? Why don't they enter the game the way any tough, self-respecting reliever from the old days did: Driven in from the bullpen in a golf cart shaped like a baseball with a giant hat for a roof.

Again, maybe not everything from the good old days would work today. But there's one thing that Selig seems to have gotten right: Using replays for disputed home run and fair/foul calls. What about expanding replay usage to overturn obvious botched calls like we saw last week with the Jim Joyce debacle (who handled things as well as could be handled, by the way)? Selig is looking into it, but that may just open a whole other can of worms -- in the NFL, sometimes the ref is under the hood for so long, you wonder if he's watching a Family Matters rerun under there ("The ruling on the field stands -- Urkel is a nerd"), and he still gets the call wrong. Replays used intelligently and with discretion? Maybe. But interleague play? Who needs it? (Actually, the Mets must be thrilled to be going to Baltimore and Cleveland this year.) 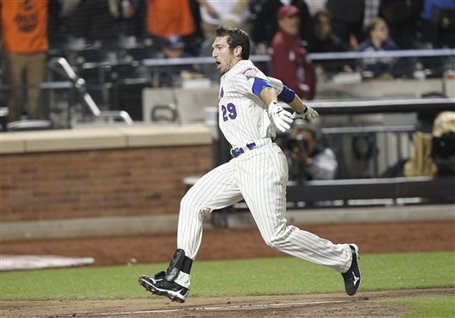 Home Sweet Home: Whether it's the home cooking, homespun humor or homemade apple pie, the Mets feel right at home at New Shea Stadium. No matter what travesties or atrocities take place on the road, once the team enters Queens they become world beaters. They reeled in the Marlins as breezily as if they were on a leisurely, relaxing weekend fishing trip. The Mets even sent Gary Matthews Jr. where he belongs: Designated for assignment. And they got away with putting Oliver Perez on the DL with a "knee injury." Next it was San Diego's turn, and things are going so well for the Amazin's at home that they can hit into a triple play and still win the game. They bookended an Ike Davis walk-off home run win and a spectacular Jon Niese complete-game one-hit shutout around a subpar Johan Santana loss. They finished 5-1 on the home stand. Lady Gaga still flipped them off, though.

For the Birds: The Yankees hit a speed bump in Toronto, and then moved on to Baltimore, where the 2010 Orioles exist to cure whatever ails the opposition. And for the first two games things were true to form. Need to win a series after losing the preceding one? Cured. CC Sabathia needs to get back on the winning track? Cured. A Mark Teixeira slump? Cured. Robinson Cano wants to beef up his stats? No problem. John Sterling pines to sing "The Grandy Man Can" again? Cue up a Curtis Granderson grand slam. But a sweep wasn't in the cards for the Yanks, as, yes, the O's are actually a major league team and can beat the Bombers -- maybe only one out of 11 times, but they did win and it wasn't even a dream. But only taking two out of three against Baltimore is kind of like losing the series. Just a little. And on top of that, Alex Rodriguez is injured, Jorge Posada continues to slump and A.J. Burnett was roughed up.

It's Drafty in Here: The MLB draft is pretty much a crapshoot, so it's anybody's guess how the local teams' picks will pan out. But here's a look at who they selected with their first choices. The Mets took tall, right-handed pitcher Matt Harvey with the seventh overall pick, out of North Carolina. What we know about him: He's from Mystic, Conn., throws four pitches (a heavy, sinking fastball that can reach into the upper 90s, a slider, a curve and a changeup), compares to Mike Pelfrey (at least by the Mets), has a stellar work ethic, is a workhorse, likes to work, has Scott Boras for an agent and has been known to sport a mustache. The Yanks chose high school shortstop Cito Culver with the 32nd pick. What we know about him: He's 17 years old, from upstate New York, is a switch hitter, is toolsy and athletic, his father is in prison for burning down the family's home and is a controversial pick because most thought he would still be available in one of the later rounds -- but the Bombers selected him because, as Woody Allen once said, "The heart wants what the heart wants."

There's a New Sheriff in Town . . . And his name is Avery Johnson, who has agreed to coach the Nets this week. The chatty, squeaky-voiced former Coach of the Year has won everywhere he's been. Ok, he's only coached in one place, Dallas, but he won there. Well, he didn't win a championship, but he won a lot of games. And he never did very well in the playoffs. He did win more than 12 games in every season he's coached, though, so that's good enough for the Nets.

A Day at the Races/A Night at the Fights: A big horse race in New York and boxing at Yankee Stadium all on the same day? I woke up on Saturday and it was 1936 all over again. I half expected Seabiscuit and Joe Louis to be involved. Drosselmeyer was the upset winner of the Belmont. After the race, the horse was quoted as saying, "It was a little humid out there, but I had the race in the bag the whole time. When I stepped into the gate, I said to myself, ‘It's Drosselmeyer time' and off I went." My daughter had Spangled Star as her pick to click because Spangled kind of sounds like Stengel and Casey Stengel has the same birthday as me (like every 6-year-old girl in America today, she knows who Casey Stengel is). And here's my in-depth analysis of the fight in the Bronx: I don't have HBO so I watched James Brown in an old rock 'n' roll movie, The T.A.M.I. Show, instead. Miguel Cotto, of course, defeated Yuri Foreman in the ninth round to win the junior middleweight title. Foreman's trainer threw in the white towel but it was thrown back at him. How do you say "No mas" in Yiddish?

Jets and Giants Doings: The Jets are The Sporting News' pick to win the Super Bowl this year. But the team needs to iron out a few kinks first: Darrelle Revis was back at OTAs on this week, but he and Nick Mangold are still not happy, and Woody Johnson still can't give away those 10,000 unsold PSLs. Meanwhile, Rex Ryan threw out the first pitch at the Mets game on Tuesday night looking a like a right-handed version of 1970s/80s pitcher Terry "Tub of Goo" Forster. As for the Giants, they announced they will return to Albany for the 15th consecutive year, when training camp begins, and Mathias Kiwanuka announced that he will not be riding a motorcycle any time soon. 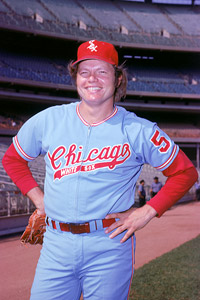 The Philosopher Coach: John Wooden died last Friday at the age of 99. He may not have anything to do with New York - though he coached native New Yorker Lew Alcindor -- but he was a sports legend and one of greatest coaches/teachers ever. Wooden won 10 championships in 27 seasons with UCLA, including seven in a row from 1967 to 1973, and his teams also won 88 consecutive games at one point. Besides how to play winning, team-first basketball, he taught his players about life, discipline and selflessness -- apparently it's not like that in the NCAA anymore.